This product enables quick and easy hot pressing of pellets and other sample forms from ambient to 250°C, to give constant and reproducible thickness films over the range 15 to 500 microns with a formed diameter of 15 mm.

The accessory consists of an integrated hydraulic press, digital temperature controller, and heated platens, together with a lightweight film maker assembly.

This design allows the heated platens to be preheated and held at the melt-point temperature required for the sample. The film-maker assembly is separately prepared with a few tens of milligrams of the sample material and appropriate sizing ring, before being introduced to the pre-heated platens.

After the film maker assembly has stabilised to the preset temperature, a load of typically 0.5 Tons is applied by rotating the press lead screw to hot press the film. On removal from the heated press, the lowthermal mass film maker assembly quickly returns to ambient temperature on the cooling plate and the pressed film is removed. The film can then be mounted in a 3 by 2 inch self adhesive card (Specacard) for infrared transmission analysis. This process appreciably shortens the film making process cycle time compared with conventional methods and, in practice, a cycle time of less than 5 minutes is possible for producing a thin film.

The Specac Mini Film-maker Kit includes the Mini Film-maker Press with integrated heated platens and digital temperature controller, a Film-maker Assembly with Film Sizing Rings of 15, 25, 50, 100, 250, and 500 microns, 200 pairs of Aluminium Foil Discs, a Cooling Plate, 100 Specacards, and Stainless Steel Tweezers (Forceps). A set of US, EU, and UK power leads is provided as standard.

Typical uses of this accessory include producing thin films for infrared quantitative analysis of polymers and plastics for regulatory or production quality assurance purposed, as well as method development for process analysis. Other applications include thin film making for tensile strength studies.

How to produce a thin film
Place the shield, selected sizing ring and smaller foil on the lower assembly.
1) The sample is put into the middle of the foil before the larger foil and upper assembly are added on top.

2) The whole assembly is placed between the preheated platen surfaces so that a tonnage load can be applied. 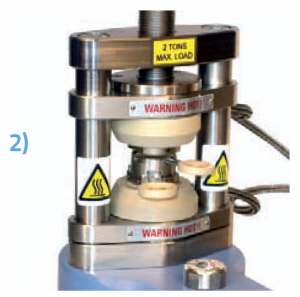 3) Once the sample has been compressed and removed from the press, take apart the assembly and carefully peel the foils away from the film inside. 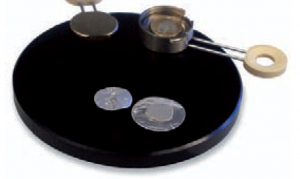 4) The film can then be put in a Specacard and placed into the spectrometer for analysis.